There are two types of twins: identical (also called monozygotic, abbreviated MZ) and fraternal (also called dizygotic, abbreviated DZ). A zygote is the fertilized egg formed when a sperm combines with (fertilizes) an egg at conception. The zygote then starts to divide and forms an embryo. The embryo is called a fetus in later stages of prenatal (before birth) development. 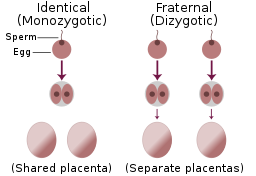 Monozygotic means “one zygote.” MZ twins develop when one egg is fertilized by one sperm to produce a single zygote. The zygote starts to develop into an embryo, but at some time during the first two weeks after conception, the developing embryo splits into two identical parts. Each part develops into a baby. The two babies are genetically identical: they share 100% of their genetic material (genes, made of DNA) and are always the same sex.

Dizygotic means “two zygotes.” DZ twins develop when two eggs are released at the same time, and are fertilized by two different sperm. These two zygotes are each implanted in the womb (uterus) and develop at the same time. On average, DZ twins share half their genetic material, which is the same amount shared between any pair of siblings. In fact, it has been jokingly said that the only difference between DZ twins and non-twin siblings is that DZ twins have been “womb-mates” for nine months. DZ twins may be of the same sex or opposite sexes.