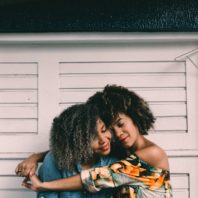 We are happy to share that a manuscript using data from the affectionate communication study has been published. Within twin pairs, identical twins were more highly correlated for expressed and received affection than fraternal twins, suggesting genetic influences play a role in affection. Using an ACE model, which is used in twin studies to estimate the contribution of genetics and the environment to a given phenotype such as affection, the study authors determined that 45% of the variance in expressed affectionate communication is heritable (due to genetics), and 0% is explained by the common environment. This means that shared influences such as being raised by the same parents in the same households had no impact on expressed affection. Only 21% of the variance in received affection was heritable. Given that received affection largely depends on others, it is not surprising to see that heritability is lower for this trait. These findings suggest that greater attention should be given to communicative behaviors by considering genetic and biological influences, and not just environmental influences.